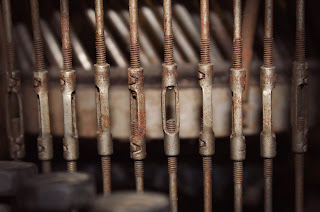 As a child, I was always in trouble for talking in class. It didn’t matter where the teachers moved me, I was always talking to someone. If I was sent to the office to do my work in a study carrel next to the disciplinarian’s office, I would talk to anyone who walked past. I just like talking.

I went to a Catholic high school and once a year, families of potential students took tours. At all small, private schools like this, the students are required to do some volunteer work and so the teachers always asked me to lead tours. I was happy to talk to people and tell them the same things over and over again. Of all the tasks that could have possibly given me, this was the best. Sister Mary Katherine of the Most Precious Blood told my father that she thought I liked to talk because I was too self-absorbed. I can imagine that it looked like that. The thing is, I like talking to people because they often talk back to me and I want to know what goes on in their heads. I talk, so I can listen.

I also have a weird habit of liking to glance in the windows of people’s houses as I walk down the street. I am not talking about being a weird creeper who sneaks up and looks in the windows but the kind of peek that I can achieve while not slacking my place as I walk along the street. I think about the people inside and what they are doing and what they are saying and what kinds of books they are reading and maybe what they are having for dinner. In a way, I am perpetually Alice asking her governess what the people lived on. I just like to know more about people.

When I am traveling, I like to look out of the windows of the plane as we approach the destination city. I like to look at the cars and trucks on the road and think about the people in them. I wonder if they are sipping coffee and what is playing on the radio. I think about the people in the houses and the lives they are living and the children who play on swing sets in backyards. Do they like to jump off the swing as it reaches its peak? Do they feel like they are flying?

Back in the day, when I was that high school where I gave tours, I used to sit in class and think about the people flying away in the planes that took off from the nearby airport. It was back when Denver’s Stapleton Airport was still in action, long before Denver International Airport’s white peaks stood in stark contrast to the eastern plains. Machebeuf Catholic High School was also its old location in Park Hill. The sounds of planes were so common that I usually didn’t even notice them but on Fridays, it seemed like there were so many more, and by the end of the week, my attention was waning. I would find myself thinking about the people on those planes and wonder where they were going and why and hoping it was for some beautifully tragic and romantic reason.

As an adult, I think about the children whose homes and schools pepper the landscape around the airport I am flying into. Do they think about us in the plane? Are we maybe thinking about each other at the exact same moment? It could happen. I could be landing in this city and passing over this child’s house at the exact moment that he is out in the yard and despite how many planes pass over his house, he thinks about the people in the one. I always want to wave but I don’t because I don’t want the people sitting next to me to think I am crazy. Of course, I am a little crazy, I am a writer and we have to break our brains a little to write. It is just part of the gig.

I flew into Chicago recently and I had all these same thoughts that I always do. As I flew in, I looked at the houses and schools and all the cars along the road and I thought about all of these people and especially of the children. This trip did not turn out the way I had wanted it to because my flight from Chicago back to the Upper Peninsula was canceled because of weather. It was mid-May and it was snowing back at the farm. I could not get rebooked for a full twenty-four hours and the airline temporarily misplaced my bag, they found it later, and I ended up grabbing a cab to a dumpy motel at the end of the runway. I didn’t have so much a toothbrush but I lay down to sleep, closing my eyes while the planes full of people who were actually going places took off and flew over my head.

In the morning, I washed up the best that I could and I put on the same clothes that I had worn the day before, and I checked out of the motel. I walked to the cheap pancake restaurant in the parking lot of the motel and ordered some breakfast. I don’t like eating alone. I like eating just fine, in fact, I like it a lot, I just don’t like eating alone. I was approaching the novel that I had bought I started to get a little concerned about how I was going to keep myself occupied. My unfinished knitting was in my bag and somewhere in the bowels of the airport along the with the novel I was borrowing from a friend. I was killing time with coffee and even dessert.

A friend of a friend of mine was coming to get me and give me a couple of hours of respite from the airport along with more (better) coffee and a toothbrush. I decided to wait outside. Sitting on the bench outside of the restaurant, I looked up at the airplanes taking off over my head. I thought about how I had listened jealously to the sound of other people’s flights leaving the night before and how I had looked down as I was flying in yesterday afternoon. I wondered if I would remember to think about the people in this restaurant when it was finally my turn to take off later today. Will I remember to think of the people scattered around the area who might be hunkered down and waiting, waiting for flights that are delayed or even canceled for all kinds of reasons. I took a photo so I could send it to my husband. He probably didn’t understand why it was important to me but it was.

Later on, in the late afternoon, I was sitting in the airport, waiting for my plane to take off and hoping that I would be home in my own bed in a few hours. I had bought a new novel, a good thick one, and settled in with a water bottle and enough room to stretch out a little. At the gate next to us, a tired throng of Canadians moved in after their gate had been changed. They all looked tired and uncomfortable and all of them just wanted to be back home.

“This always happens when we come to America,” an older woman leaned in to tell me.
I wasn’t sure if she assumed I was Canadian as well but she opened the door and I was ready to talk. I chatted and got to know the circle of people around me. I will talk to anyone who is willing to listen, sometimes I find myself talking to people who are unwilling, but I keep at it. Suddenly an announcement came over the loud-speaker and we all hushed to hear it. I was afraid it was my flight but it wasn’t. The Canadians were being delayed again and moved to another gate. I felt awful for them because I had been at the airport for most of the last twenty-four hours. I also felt bad for the Canada-Air representative. The passengers reamed him in a strangely polite and quintessentially Canadian way.

A woman in a beautiful sari run through with glittery threads got right in his face and said in a clipped Indian accent. “I am sorry but if we are to talk about what is bad service, it would be this, you know. This is what we would call bad service. I am sorry but it is.”

Properly admonished, he replied, “Yes, ma'am. I am sorry.” They nodded at each other and the Canadians all shuffled along to their gate. I was left alone with my novel while I waited for my flight.

Ultimately, my plane did take off and I did get out of Chicago. My plane left flying over all the little houses and other buildings that pepper the area around the airport. I forgot to think about the pancake restaurant and dumpy motel and the people who might be down there waiting for their planes. I forgot to think about the children who might be getting ready for the night or even reading their own novels next to bedside lamps. Instead, I thought of my own bed waiting for me in a little green and white farmhouse near the lake and the many Canadian beds waiting hopefully for tired and spent travelers.

Posted by Melissa Naasko at 9:58 AM

Email ThisBlogThis!Share to TwitterShare to FacebookShare to Pinterest
Labels: Slice of Life